I passed through Burgas airport a couple of days before a suicide bomber killed 5 Israelis & 2 Bulgarians on 18th July 2012, and I then passed through the airport again a couple of weeks later, in between I knew some friends who went through the airport just a fews day after the incident. Burgas Airport is the smallest of passenger airports and is located on the Bulgarian Black Sea coast, and is used mainly in the summer by holiday makers, myself included. 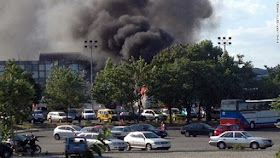 A Side Point
Interestingly on way out from Manchester airport to Burgas, the Thomas Cook check in crew we're only focused on making money from excess badge amounts and things like extra leg room seats, it was the first time I've never been asked if I packed my bags myself and whether my bags had been out of my sight at a check-in desk. A sign of the tough financial times as Thomas Cook just posted a £26.5 Million quarter loss, or security complacency, I thought.

Airport Security Theatre
It would be extremely irresponsible to point out airport security flaws, but needles to say the amount of additional 'Security Theatre' at Burgas airport post bombing as expected was considerable, but only for about 10 days. I didn't coin the phrase 'Security Theatre', but it's a very apt phrase to what several friends were subjected to at the airport, because the additional security hoops passengers were put through did nothing to lessen the threats to the aircraft. Further these measures didn't do anything to make passengers feel safer, if anything it raised anxiety considerably. However a few days later the additional security measures were all dropped the airport returned to as as it was prior to the bombing.

Data Breach Parallel
My main point here is this very much the same as when a business suffers a major data breach and receives public and media criticism. Often a knee jerk response of security theatre is introduced which does nothing to combat the actual causes of the data breach, but makes good sounds bites within media interviews. Then once the media focused dissipates, the business returns to as it was prior to the breach, including keeping the security complacency and not correcting he existing flaws which led to the breach in the first place.
SecurityExpert at 00:30
Share