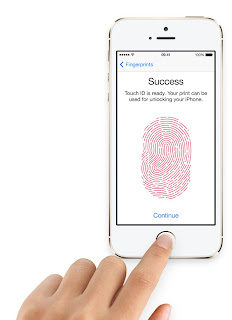 Fingerprint reader is the main button

Security of the Fingerprint Reader
The fingerprint reader is not like the traditional readers you see on laptops, and is actually part of the main button on the phone. The reader is no security gimmick as it is not a outdated optical reader, which works by taking and comparing a picture of your fingerprint, it is a capacitance reader,which is a more advanced and secure technology. Capacitance readers uses an electrical current to map your fingerprint, measures the minuscule differences in conductivity caused by the raised parts of your fingerprint, which makes it very difficult to defeat. I don't like to advocate the security of anything without inspecting, researching and testing a device myself, but I will say this reader has certainly been designed with security in mind.
Apple has faith in Reader's Security
Apple have a lot faith in the security of reader, which is a good sign, stating it will not only be used to unlock the iPhone, but to verify user's Apple IDs to make account purchases. This method of device authentication, if proven, makes an interesting development for within the mobile device payments space, and perhaps could be a viable alternative to website passwords.

The Phone Lock Benefit
Given how fast the authentication works in comparison to using a passcode or password, then I see additional security benefit to be had with the account lockout time-limit. Setting the phone lockout timeout to 5 minutes or even 1 minute of inactivity becomes more viable, as the current trade off in accessing the phone with a slowly entered passcode/password is replaced by near instance touch authentication and access. 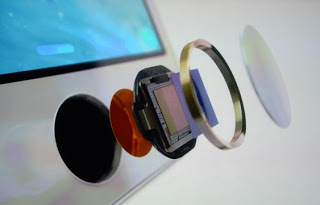 In all a very interesting and innovative security addition by Apple, so much kudos to them. Now I need to get my hands on an iPhone5S to test it.
SecurityExpert at 23:30
Share