I was featured in The Sun newspaper today in relation to Internet Trolls.  Trolling or a Troll is net slang for an individual who intentionally posts inflammatory, insulting or threatening remarks online. Pretty much anywhere where people can feedback comments on the Internet, such as on Forums, Facebook pages, Twitter, YouTube, Newspaper comments, is often subject to abusive comments. People can say the most extreme things when they think they are protected with the shroud of anonymity, words they’d never dream of saying to anyone face to face. However there are increasingly individuals that post abusive comments which go well beyond the boundaries of decency and taste, these are the individuals which are really regarded as the trolls under the definition.

Recently a troll was convicted for abusing tribute websites of deceased girls, bringing the whole trolling issue into the public arena - http://www.bbc.co.uk/news/uk-england-14907590

You're not as anonymous as you might think
Forget China, the UK is one of the most high-tech surveillance counties in the world, we are most certainly not as anonymous as we might think online.  Many of the suggested workarounds to provide anonymity I hear about just don’t work. For instance Google stores every search you type in, these searches are linked to your physical computer(s), or if you have a Google account, direct to you individually. Google covertly provide all this info to the Police and our government security agencies when requested.  Apple monitor your movements and usage, while phone network providers, Internet Service Providers (ISPs),  Social Network websites all record every little detail about what you do and when you do it.  We do live in an Orwellian 1984 society, just accept it, there is no going back, there is no escape and there is no hiding place online, they’ll catch up with you eventually. All this is not quite as exciting as portrayed by Hollywood blockbuster movies or CSI Miami, just thousands of lines information which is being collected, recording what we are doing online, however the real life law enforcement is just getting to grips in using this vast amount of information, aside from the troll conviction, terrorism prevention and several murder cases, the many arrests and convictions for incitement of riots by individuals online is another example. If you ever did want to disappear and live anonymously, the first thing you should do is stop using the Internet! 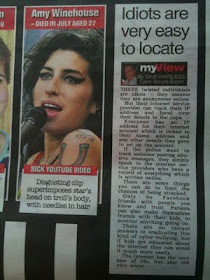 "Idiots are very easy to locate
These twisted individuals are idiots — they assume they are anonymous online.
But their internet service provider can track their IP address and hand over their details to the cops.
Everyone has an IP address for their internet account which is linked to their name, address and any other details they gave to set up the account.
If the police want to track someone posting abusive messages, they simply speak to the internet service providers who have a record of everything which is written online.
There are some things you can do to limit the chances of being attacked.
Only be Facebook friends with people you know and trust. Parents can also make themselves friends with their kids, to monitor anything going on.
There are no instant answers to eradicating this kind of cyber-bullying, but if kids get educated about the internet they can avoid it much more easily.
The internet has the very best of life, but also the very worst." 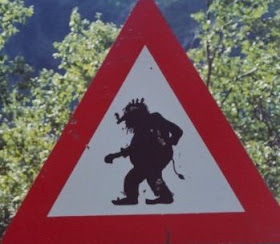 1. Prevention
Trolling can be simple to prevent in certain circumstances. If you have at webpage at risk, which has the ability to enable comment pre-screening, namely you or other trusted individuals approving all comments before they can be posted, do it, as it will almost certainly prevent trolling. Trolls won’t even bother to make a remark if they know their comments are going to be checked before they are posted.

2. Dealing with Trolling Incidents
Trolling is most definitely illegal as per the Communications Act 2003, Section 127.  Therefore if you are a victim of trolling, by that I mean abusive comments which go beyond the pale of decency, consider reporting them to your local Police. http://www.police.uk/