A little off-topic but recently I've been asked so many times about the Pearl Parties live broadcasts appearing all over Facebook status walls. If you haven't heard of Pearl Parties, they are sales broadcasts where the hosts entice viewers to buy sealed oysters which are opened live on the broadcast, any pearls found inside are sent to the buyer, and there always seems to be plenty of pearls found.

So I did some research and watched several of these broadcasts, it becomes clear why these broadcasts are appearing all over Facebook, as the party hosts constantly offer the chance to win free oyster opening to all viewers that share the broadcast. After further investigation, it becomes even clearer these Pearl Party broadcasts aren't the harmless fun the presenters insinuate but appear to be deceptive. 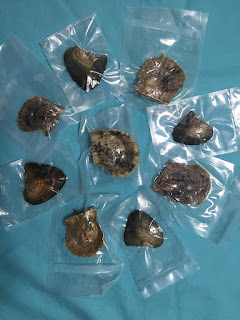 The oysters opened on the Facebook live broadcast are real enough, they are bought in wholesale by the oyster party rep, but the copious pearls discovered inside them aren't quite as legit, rare and valuable as you might think. I have discovered two methods behind the high number pearls found inside them.  Either the freshwater oysters have been cultured, basically hacked and farmed into growing the pearls, or the oysters had the pearls inserted within them, after which they are dropped into a chemical bath to make them snap close, killing and preserving the oyster. With either method, the oysters individually vacuum packed before being shipped off from the Far East to the party hosts in bulk. 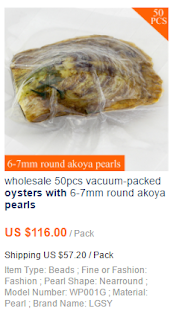 Cheap as Chips Oysters are bought in Bulk

On the Pearl Party broadcasts I observed, it cost £30 to £50 to open a batch of 5 oysters, which is a considerable markup from the direct online price of around £1 to £2 per oyster. Often the punters don't get the chance to buy a set number of oysters to be opened in the hope of receiving any pearls found inside, as there is a random based game to be played to determine how many oysters are opened for their set payment. These games involve rolling a dice or spinning a wheel to decide the number oysters open, which in itself probably breaks gaming licensing laws in many countries. This game is part of the deception, it is used to make buyers think they have won something and disguise the fact are paying well over the odds for the low grade nearly worthless pearls they end up receiving. 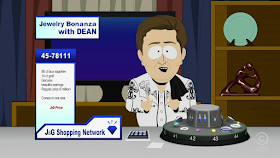 Pearl Party Sales are similar to the Shopping Channels

As the party host opens each oyster on the broadcast, they blag how wonderful the pearls look, using lightning and display techniques to make each pearl look as glamorous as possible, the same techniques employed the professionals on jewelry shopping channels, but they really exaggerate the quality and value. In reality, the pearls you presented with are nothing of the quality of actual rare high-value natural pearls. Some hosts will even measure, rate the colour and shape, and conclude a value for each pearl, which is always way more the buyer has actually paid. Consider this if the host really thought the pearls were worth as much as they are saying, why on earth would they bother with the broadcast and just sell them directly themselves!

The host will also offer to set your pearls in jewelry, like earrings and necklaces, all for an extra cost of course.

I also found some hosts operate on behalf of companies in a pyramid-like scheme, where they pay a set amount in, oysters are supplied to them, the more they sell the more they rise up the pyramid ranks and the more money they make.

So be warned, don't participate in promoting these scams to your friends by sharing Pearl Party Facebook Live broadcasts. You'd think Facebook would do something about these types of illicit practices and gambling on their Facebook Live service, but apparently not. Given the lawless of Facebook Live, I think we can expect further scams of this nature in the near future.
SecurityExpert at 00:49
Share