The sun is rising on the exciting and limitless age of 3D printing. 3D printing technology is really starting to pick up the pace, the latest evolutions of the technology means 3D printers are not only becoming more affordable, but the objects 3D printers can produce are becoming more sophisticated, allowing for all manor of potential object capability and application. 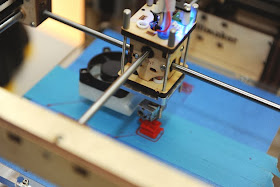 Anyone can have their designs 3D printed through online services already, and in the coming years we can expect to see 3D printers within many households. Perhaps as part of your weekly shopping visit to your local supermarket, you'll pick up your 3D printed objects from a supermarket 3D printer counter, just as you might do with photograph prints today. 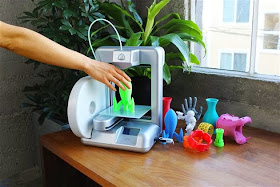 3D Printers for the Home

Exciting as the 3D printing is, I foresee the technology will be blighted with piracy problems, along the lines of what we saw with illegal music downloads pre music stores like Apple iTunes, and music streaming services. Just like MP3 files, 3D print designs are creatively owned digital property, and just like MP3 files, 3D designs will be easily proliferated online.  As with music, the potential number of original 3D print designs is infinite, so we can expect an explosion of 3D print designs as the technology enters the mainstream, mushrooming into perhaps hundreds of thousands of individual designs, these will include commercial designs, made by individuals and companies, creating 3D designs for sale. 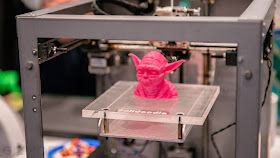 The question is whether this new 3D print industry will have learned from the problems encountered with the digital revolution of music and eBooks, will we see the building of 3D print stores to control the distribution of 3D designs?  I’d be very surprised if the likes of Apple, Amazon, Google, and even supermarket chains like Wal-Mart and Tesco are not looking at this potentially highly profitable new market. I believe the extent of 3D printer piracy will be dependant on the price point of commercial designs within such 3D design stores. If designs prove over expensive, you can bet a black market of 3D print designs to be strong, if designs are cheap, like most Smartphone Apps are today, perhaps the amount of piracy will be low enough for a commercial 3D print design market to flourish. 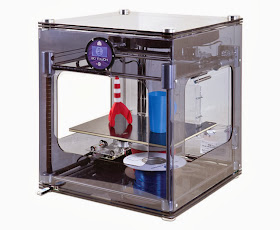 There is another piracy issue with 3D printers which I expect to rear its ugly head, namely the ability to use 3D printers to reproduce goods illegally. The technology will presents an ability to reproduce identical copies of legitimately produced objects or copyrighted/trademarked designs. Let’s say I invented a new type of plastic coffee cup holder, that’s unique, and people happen to really like it.  So I patented my original design, put it into production and push out to retail. All the counterfeiters need to do is buy one, 3D scan it, at which point they will have the 3D design, from this point they have the ability to effortlessly reproduce identical copies of my coffee cup object with a 3D printer. These copies could even be even mass produced; there are already commercial 3D printer factories in existence, which have 100s of 3D printers in situate, mass producing objects 24/7. This counterfeiting could even be taken a step further, by merely sharing the design online, it allows anyone in the world to reproduce my cool coffee cup holder perfectly. Counterfeit goods are already a huge enough problem, fuelled by the lack of enforceable international wide copyright laws, it just takes a quick search for cheap Dr.Dre headphones on eBay, or a browse at your local street market to see the extent of existing counterfeit market. 3D printing will take this black market to a whole new next level. 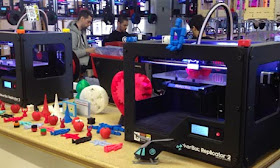 It looks like the 3D print market will be huge, so the importance of protecting 3D print designs will be a key part to how this exciting new market will commercially prosper. But even with 3D design stores selling object designs at low prices, I fear we’ll see a new type of digital piracy, no matter what security steps are taken by 3D print stores, such is the way of our digital world.  I’m off to work on my cool coffee cup holder design!
SecurityExpert at 02:26 6 comments:
Share
‹
›
Home
View web version