Today the Information Commissioner's Office (ICO) announced a record fine of £440,000 against the owners of Tetrus Telecoms. The ICO stated the Manchester based Tetrus Telecoms, were responsible for sending millions of unsolicited text messages using unregistered SIM cards, and personal data gained illegally.  Tetrus Telecoms were said to be sending 840,000 spam text messages a day promoting PPI claims and accident compensation claims, in the hope of earning a referral fee should any of the recipients respond. These referral fees netted the text spammers £8,000 a day. This is a lot of easy money, but it does mean 99.9% of those receiving the texts didn't reply, and so didn't want the text message in the first place. 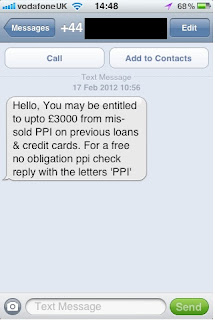 Who hasn't had a PPI Text Message this year?

Finally the ICO dishes out a fine which is close to their maximum amount of £500K. Often criticised as a toothless tiger, the ICO fines are really hit and miss, however this £440K fine is the highest amount levied to date.

Finally a significant fine amount from the ICO against the owners of a private company. I don't agree with the past ICO six figure fines against public sector organisations, such as local authorities and the NHS, as in affect the ICO are taking money out of the public purse. Not great especially in these tough economic times, as these fines hit budgets, which in turn hit the provision public services. Negative publicity and pressure on organisation leaders, are the more appropriate method in dealing with publicly funded organisations that breach the Data Protection Act (DPA). Furthermore public sector fines appear not to be too much of a deterrent, as the NHS and local authorities continue to breach the DPA regularly  Private business are motivated by financial penalties hitting their profit margins, but the private sector do not have to disclose DPA breaches to the ICO. Also if a business volunteers for an ICO audit, they appear to be handed a "get out of jail free card" for any data breaches they knowingly have incurred. Businesses Consider Abusing ICO Data Breach Fine ‘Loophole’ 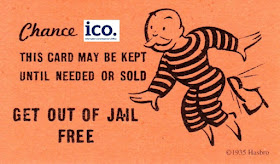 Finally the ICO gets tough with text spammers, an issue which the vast majority of the UK public actually do really care about. Who doesn't hate being bombarded with streams of PPI text messages on our mobiles? Most people have received loads of these unwanted texts this year, wondering why such messages are allowed to be sent.  But it does beg the question, why has it taken the ICO so long to deal with text spamming, and what about phone call and email spamming which are equally rife. There are many other UK based illegal spamming operations in play, isn't it in the public interest to have these tackled as well?
SecurityExpert at 23:30 No comments:
Share

Back in September 2007, I attended the inaugural Payment Cards Industry Security Standards Council (PCI SSC) Community Meeting in Toronto.  These were the days before PCI was big business, there must of been only a couple of hundred people at the event in a typical down town Hotel in Toronto.  PCI was still finding its feet, the PCI SSC Board members spent most of the event being grilled by delegates brimming with questions about the PCI standard, and it is fair to say some delegates weren't happy chappies at all. I took the opportunity of asking SSC Board members several questions myself, looking back today some of my questions could be seen as rather naive, given who is behind setting up the PCI SSC and why.

I asked why PCI SSC doesn't just regulate the card issuers, challenge them with a standard to secure the cards and cardholder data to a higher degree, instead of passing the buck onto to everyone else in the industry. I explained how in Europe we had just started using a new two-factor authentication system, Chip and Pin, which was already dramatically cutting face-to-face card fraud (known as cardholder-present transactions). I argued they just needed to replicate the two-factor authentication for when we couldn't prove a person (cardholder) was in possession of a payment card, specifically with telephone, online and perhaps mail order payments (known as cardholder-not-present or MOTO payments).  My point was the industry should be focusing on updating the plastic card technology itself, which had been standing still for decades with its 1970s magnetic strip holding sensitive card data on the back, wasn't it time to evolve the technology and make the cardholder data itself worthless, in order to combat card fraud more effectively? 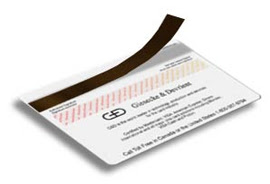 Magnetic Strip
Of course these questions and points all fell onto deaf ears, as the PCI SSC is about regulating cardholder data beyond the card issuers, passing the failing and fraud cost of weakly secured plastic cards onto the Payment Processors and Retailers, that need to process them for payments.  The one big downside to PCI DSS, is companies are paying to protect someone else's data, as cardholder belongs to the card brands (i.e. Visa, MasterCard, Amex), and not to the cardholders. My gripe is companies invest more in protecting someone else's data better than they do their own confidential information, and more importantly more than other people's personal sensitive data. This often leads to their information security budgets being plundered by PCI programmes in order to protect card brand's data at the expensive of protecting citizen's personal data.

Five years on from that Toronto meeting, it is clear for many years now, that Chip & Pin (EMV) works in cutting cardholder present fraud, every Information Security professional knows the benefits in using a two-factor authentication system. Only now has North America finally started to push Chip & Pin for cardholder present transactions following the European success, could the penny have finally dropped? Are card brands and card issuers now seriously thinking about using two-factor authentication to protect online transactions from fraud as well?

To secure online transactions in the same way as Chip & Pin, you need to ensure the cardholder is in possession of their card. This can be accomplished by using a unique number generator onto a thin LCD screen on the card itself, this card number. This one time number can be generated using a timed encryption sequence  which creates a unique number valid only for a limited time. This number can be keyed in or spoken by the cardholder, and so used to corroborate the payment card itself is in possession of a cardholder. Further the security could be seriously ramped up by first requiring the cardholder to type in their PIN on the card itself before generating the number. This gives a two-factor authentication for online and telephone payments (MOTO), both proof of possession of the card (something you have), and the cardholder must know their PIN number (something you know), well recently both Visa Europe and MasterCard have announced new cards that do just that. 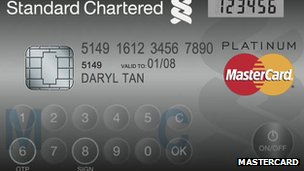 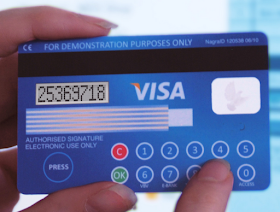 Why we want one of those
Most card consumers don't want gimmicky pictures of themselves on their payment cards, we want two-authentication for all our card payments, not just at the checkout. Why? because consumers actually do care about having their accounts hit by fraudulent transactions, and do want to be decently protected, as when all is said and done, all consumers foot both the card fraud bill and the retailers PCI bill. These new generation of cards present dealing with the root cause of the card fraud problem, the weakly secured plastic itself, and has to be the best way forward.

Death of PCI
For retailers, if all cards switched to two-factor authentication completely, it could finally mean they don't need to protect cardholder data, certainly not to the same degree at present, which really could spell the death of PCI. We'll have to wait and see before this 'not new' technology takes off in the industry, but I don't think PCI DSS will be around a decade from now.
SecurityExpert at 19:30 5 comments:
Share

4 Ways Your Child is Vulnerable to Identity Theft

Scary American made awareness video on Child identity theft by Good Money.  It's titled "5 Ways", but it's actually 4 ways for UK parents, we can ignore number 2 on Social Security numbers.


My recommendation is to educate and monitor your children/teenagers online activity, and teach them to secure their personal information digital footprint online.

5 Ways Your Child is Vulnerable to Identity Theft Online from Good Money by CreditScore.net on Vimeo.

According to the United States Bureau of Justice Statistics, in 2010, 7% or “8.6 million households had at least one member age 12 or older who experienced one or more types of identity theft victimization.” But identity theft is not just reserved for tweens and adults. In this age of information, children are increasingly vulnerable to the same kinds of attacks that cripple credit scores and bust bank accounts. Check out this video to learn about five ways you could be exposing your child’s sensitive information to identity theft.
SecurityExpert at 00:30 13 comments:
Share

ICO fines Stoke-on-Trent City Council £120,000 after sensitive information about a child protection legal case was emailed to the wrong person
ICO fines Greater Manchester Police £150,000 following the theft of a memory stick holding sensitive personal data from an police officer’s home
ICO serve a £70,000 monetary penalty to Norwood Ravenswood after sensitive information about four children was lost after being left outside of a house
ICO release a statement stating it was concerned with personal data protection within local government and the NHS
ICO issues two monetary penalties over £250,000 to two marketers responsible for distributing millions of spam texts